We left Delhi at 8 am on the bus. As we left the hotel, we all noticed there was a metal detector built into the doorway. Outside there were women with children and babies begging for money. When we boarded the bus, they would bang on the side to get our attention. I knew I couldn’t look at the kids, I just had to pretend they weren’t there.

The drive to Jaipur was about 8 hours, including a stop for lunch.

There was so much to see, it really didn’t feel like 8 hours. Our tour CEO was great and kept us entertained by telling stories of religion and history along the way.

Normally the tour would stop at the India Gate in Delhi, but it had been closed for their national holiday.

We commented on the lines painted on the road that no one ever followed. The CEO said it was so it looked nice and organized, even if it wasn’t. We also commented on every vehicle on the road having some sort of dent or scratch, to which he called them hugs and kisses.

The traffic in Jaipur was pretty unreal, we were navigating some pretty narrow roads along with thousands of other vehicles.

We checked into our hotel, freshened up, then basically gone again for our orientation walk. I couldn’t believe we were going to walk those crazy streets we could hardly drive on. Our CEO took us through a fruit and vegetable market, then along the Main Street lined with shops of mostly spices and tea. We did purchase a pack of masala chai spice, which is what you add to black tea to make a chai. It was 100 servings for 30 rupees (not even a dollar). There’s nothing that can prepare you for the noise (honking, vehicles, shouting, music), the smells (spice, sewer, tea, food, animals, chickens getting slaughtered), the sheer number of people milling about, the traffic.

We were also going to a Bollywood movie that night, so when we got to the end of the street, we had the option of taking an auto rickshaw or a bicycle one. Everyone opted for the bicycle ones, for the experience. It was an incredible experience, but I was completely terrified. The traffic was crazy and our rickshaw driver was trying to race the other rickshaws driving our group. What was really cool was when we hit Muslim prayer time and the call to prayer was being blasted from towers. It was definitely a cool soundtrack to our ride. Here’s a video Derek took of the ride.

The movie started right away with no previews or ads, which was great. The movie had no subtitles, but we were all able to follow the story. The best part of the experience was the reaction of the crowd throughout the movie. There were “awwws” when the lead male met his love interest. Lots of excited shouts throughout. I did fall asleep, but it was such a long day. The movie also had an intermission.

After the movie, it was about 9pm and we were ready to have dinner. 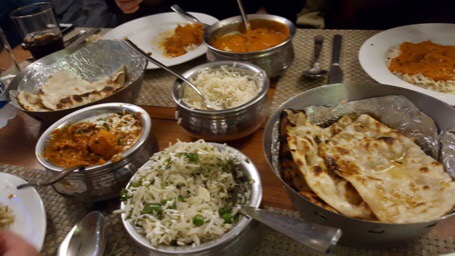 After dinner, we took auto-rickshaws back to the hotel, which cost $3 per rickshaw to drive us maybe 15 mins. Back at home, that would have been $20.