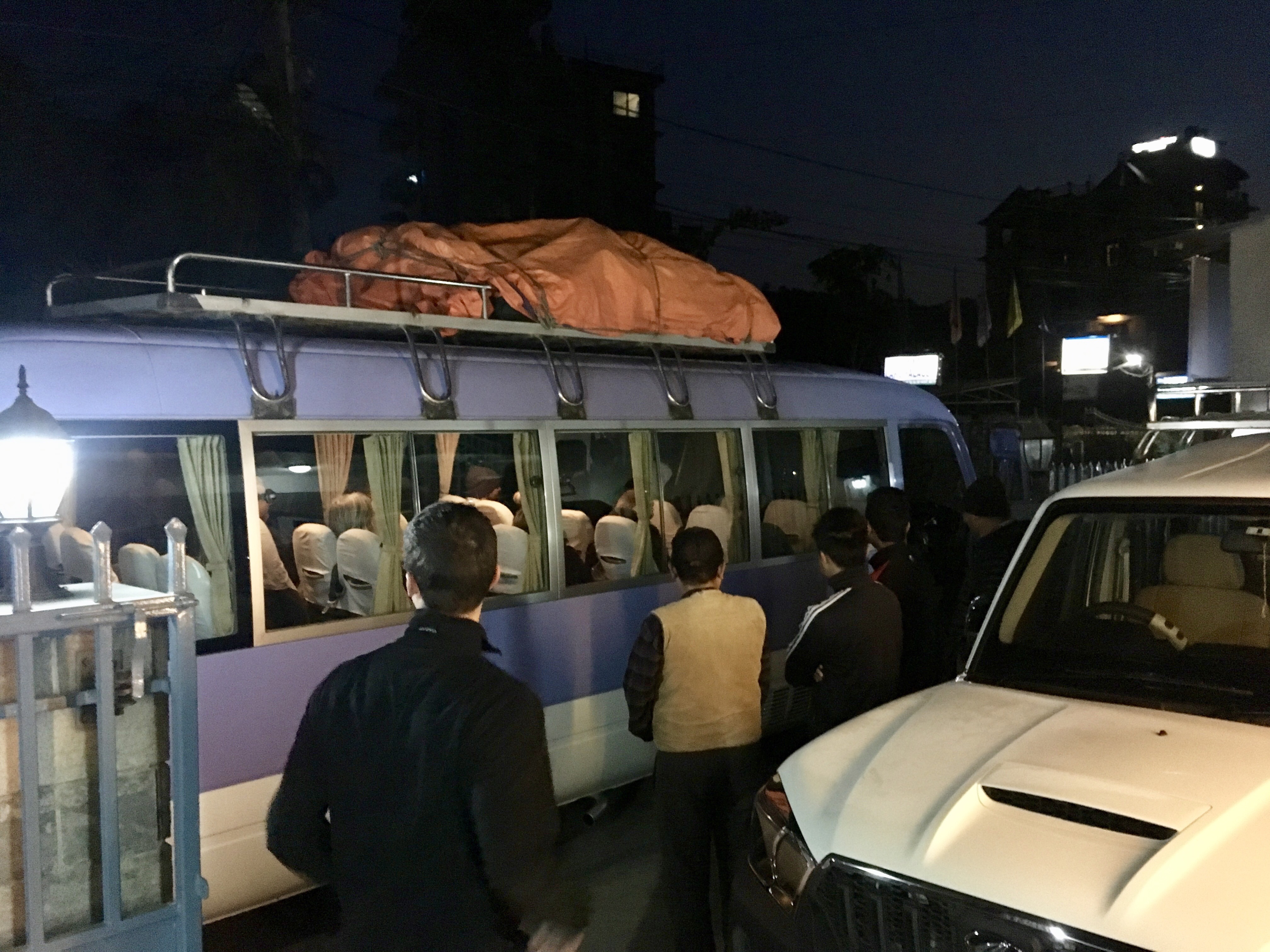 Earlier in the trip, our CEO indicated there was a flight from Pokhara to Kathmandu that was 20 minutes instead of the drive we were planned to do, which was 10 hours. Derek and I jumped on that immediately. It meant we had a full day in Kathmandu, which we wouldn’t have had otherwise. Some others didn’t go for it simply because they already had tacked on extra time in Kathmandu. Saying good bye to our group:

Waiting for our flight: 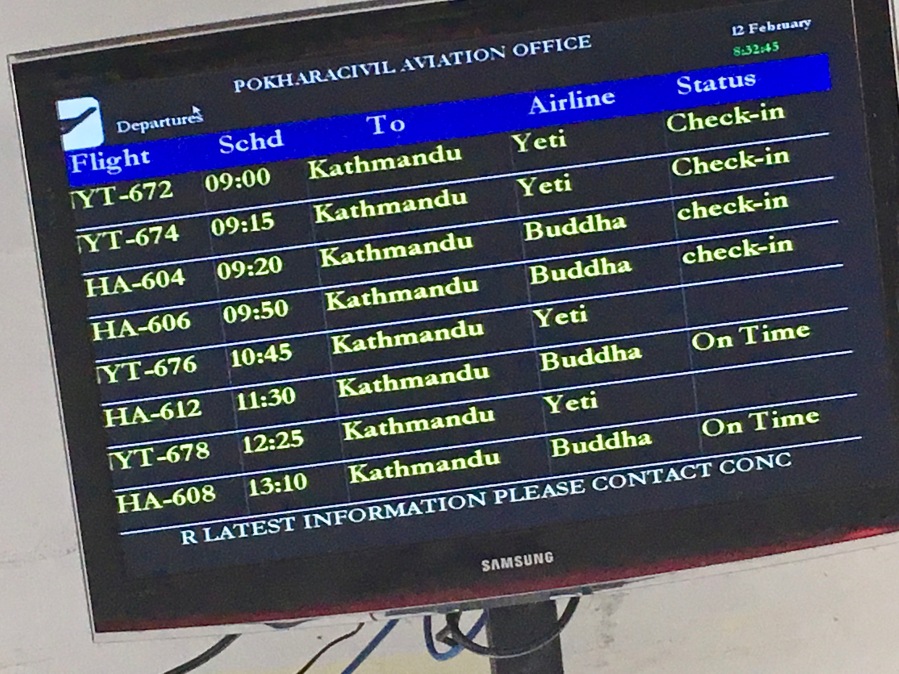 In total, there was 6 of us on the flight. Our CEO even arranged a tour for us when we got there.
It was a great flight, with great views of the Himalayas. 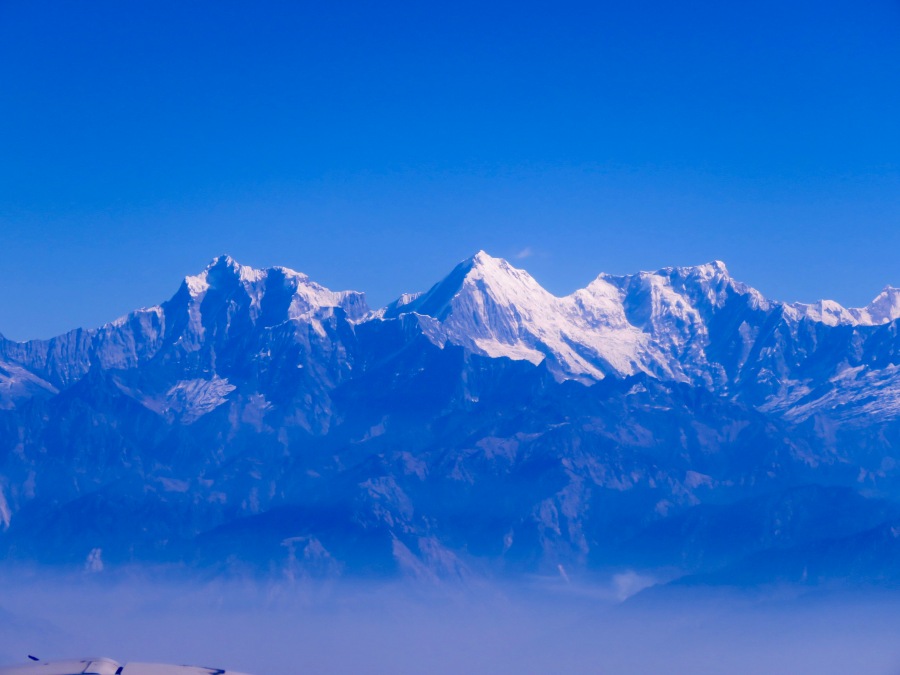 Despite the flight only being 20 minutes, we were offed hard candy and tea or coffee. I opted for the tea, which was hot water in a cup with a 3-in-1 powder which was tea, milk, sugar. 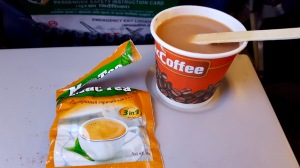 Upon landing, our tour guide was waiting for us. He first took us to Bhacktapur, which is an ancient city just outside of Kathmandu where many people are still living and working. It had been hit hard by the earthquake in 2015, but they’ve made good progress in the reconstruction. There was still a fair bit to do, but looking at the pictures online of what it was like, there’s an impressive difference. Bhacktapur was definitely a highlight of our time in Kathmandu. There was so much to look at, from architecture of the shops and homes to the architecture of the Hindu temples, now in a pagoda style. 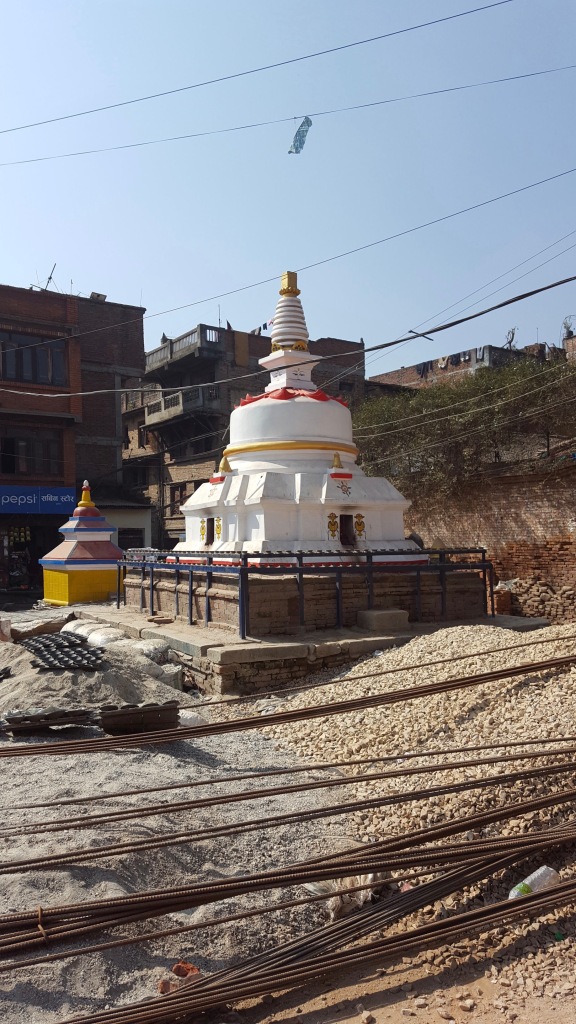 We then went to into some Buddhist territory and visited the Great Stupa (Boudhanath Stupa). 99% of this trip highlighted Hinduism, even when in Nepal. I expected Nepal to be more Buddhist, but it is very much a Hindu country. Something I didn’t know is that Buddha is an incarnation or avatar of the Hindu god Vishnu. 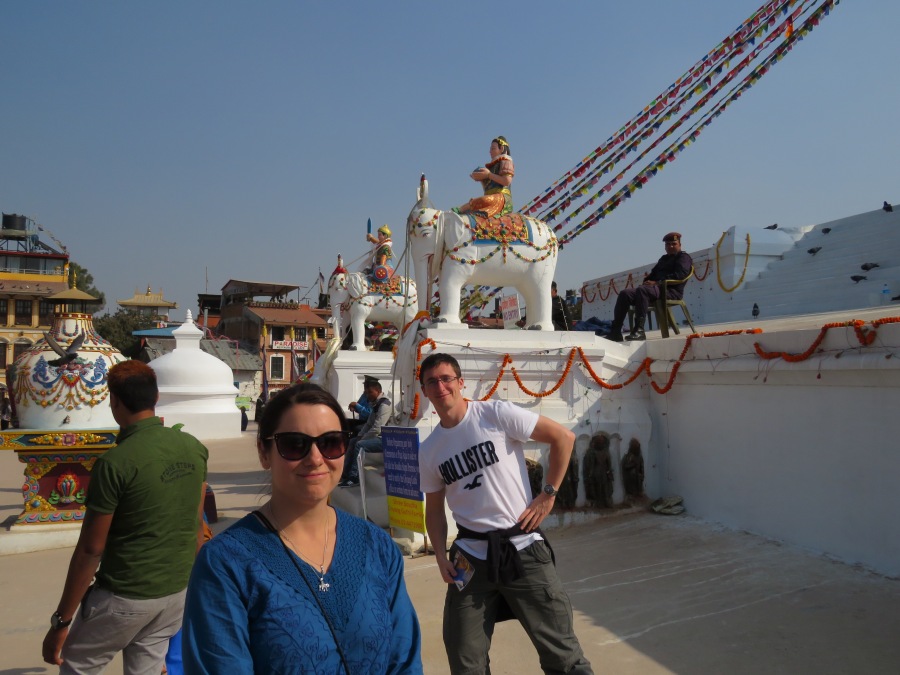 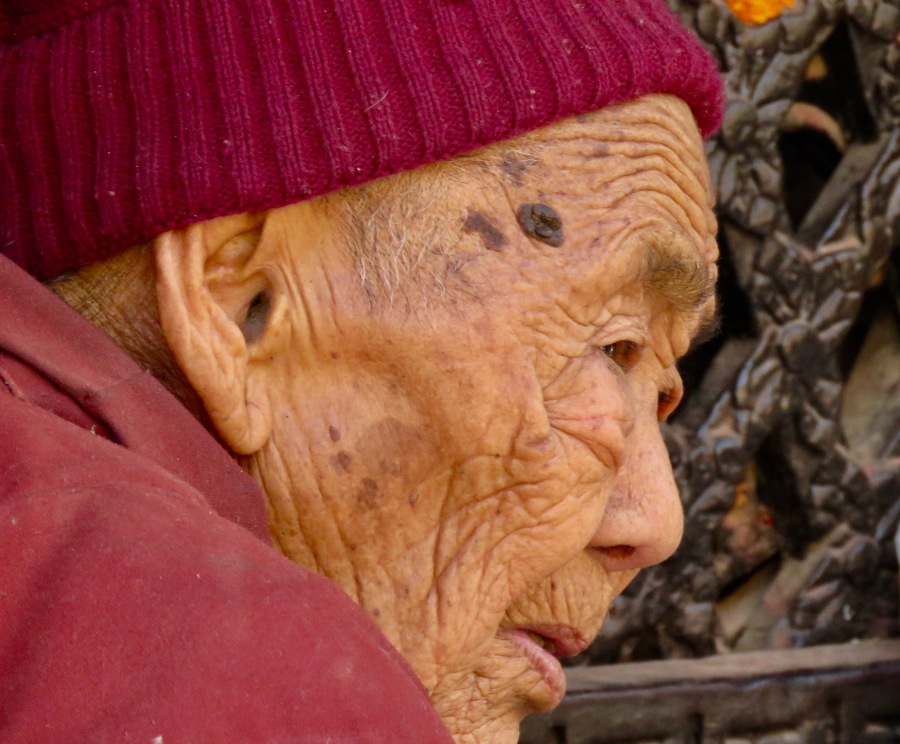 We barely had time for one more stop, which was the monkey temple, known as Swayambhu Stupa. It was another Buddhist temple, this time with monkeys. One of the ladies on the tour with us had her ice cream snatched by a monkey. We were standing by a fountain when a monkey jumped on the rails. The next thing we knew it, this girl screamed and we realized the monkey now had her ice cream. We all had a good laugh about it. 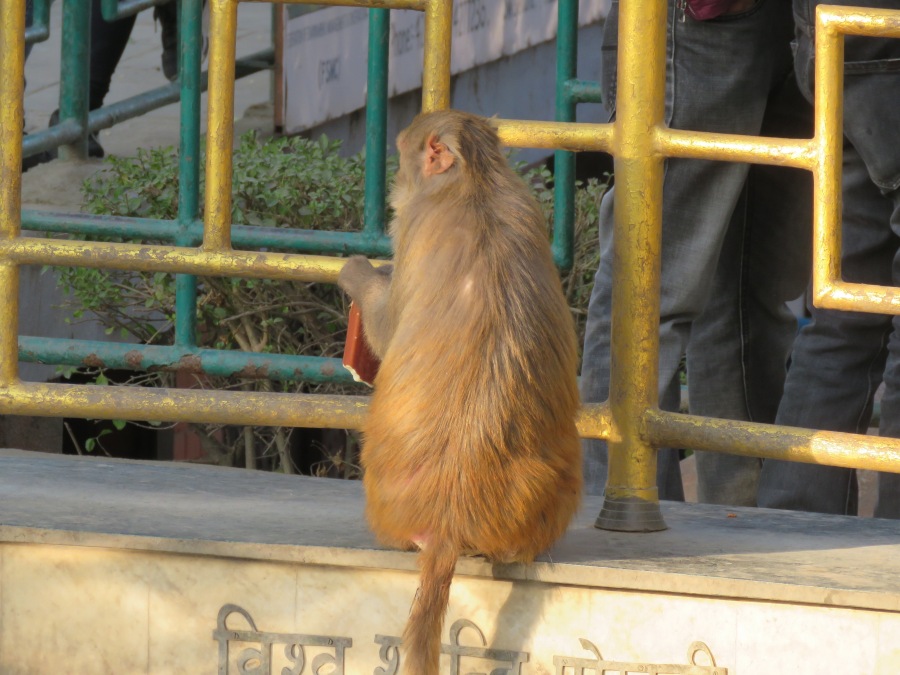 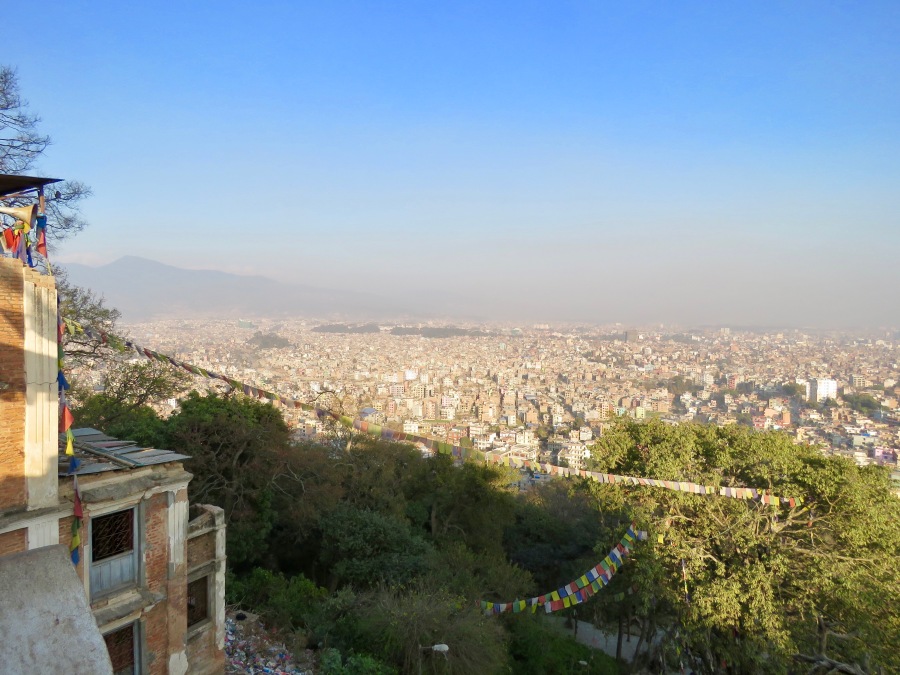 There were a handful of beggars here, mostly kids and mothers with kids. The first couple of kids we came across were completely filthy and smelled awful. It was just so sad. The kids and the poverty were really starting to get to me. Early on in the trip, I felt numb to it, like I was just watching a movie.
Driving to our hotel, we noticed just how dusty the city was. Almost everyone wore some sort of mask (except not in this particular photo).

The hotel was amazing. 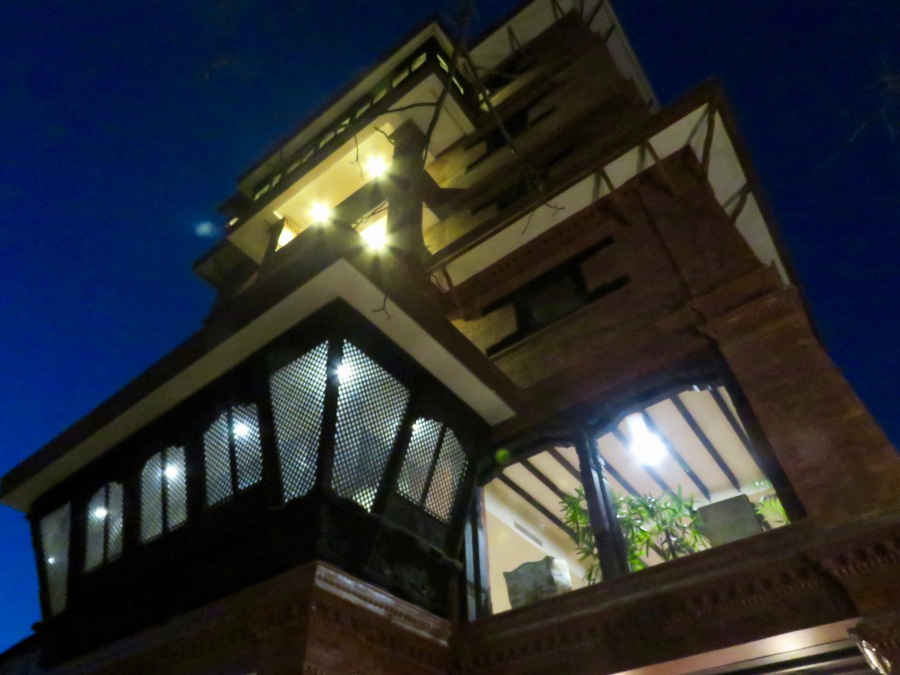 We were greeted with some silky fabric draped over our shoulders. Getting into our room, we immediately checked out the shower. It was a rain shower head, and more importantly had hot water. With only an hour to spare before our orientation walk and dinner, we both had to have a shower anyway. I thought of those street kids and how they will probably never see a shower in their lifetime. Maybe not even hot water.
We walked about 30 minutes to our dining spot. It was in a much more touristy location than our hotel, which had a lot more shops and restaurants. 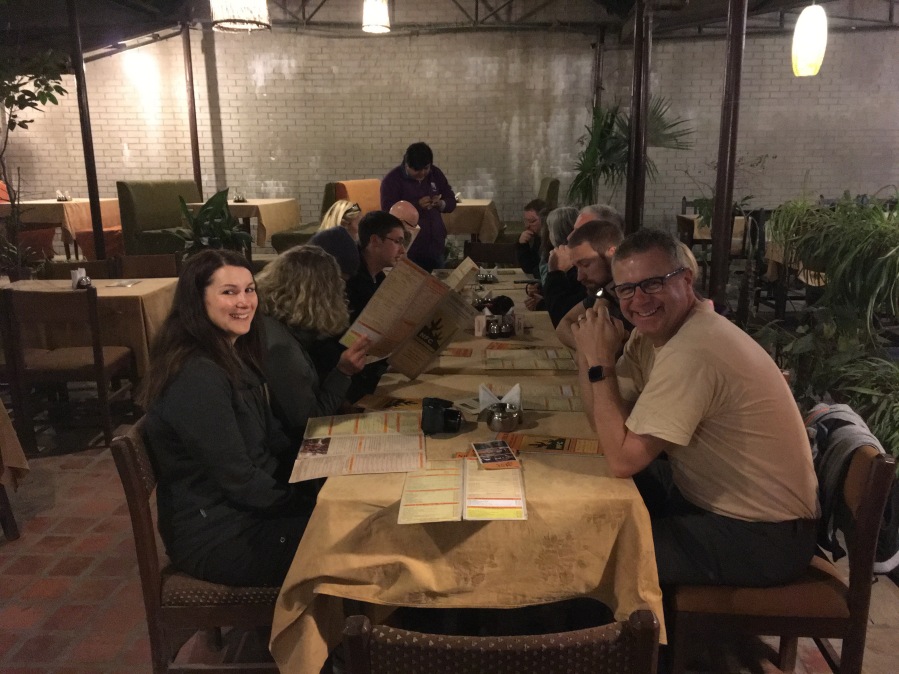 On the walk back to the hotel:

The hotel bed was incredible. I just melted into it. It was the best bed I’d slept in in two weeks. The covers were down comforters and the mattress was more than 2″ on wood planks. It was too bad we had to be up at 6 am.