We didn’t have to meet our group till 11 am, so we all figured it would be great to sleep in. 6:30 am hit and speakers came on with a man speaking Hindi. Followed by a female singing. It stopped for a while, then repeated. There would be no sleeping in. We later found out this was the lifeguard talking to people bathing in the river.

Our CEO arranged some tuk tuks for us to go to the Orchha Palace, even through it was easily walking distance.  From the sounds of it, he isn’t a fan of waking. We toured the palace with a local guide and learned some more history around Hinduism. 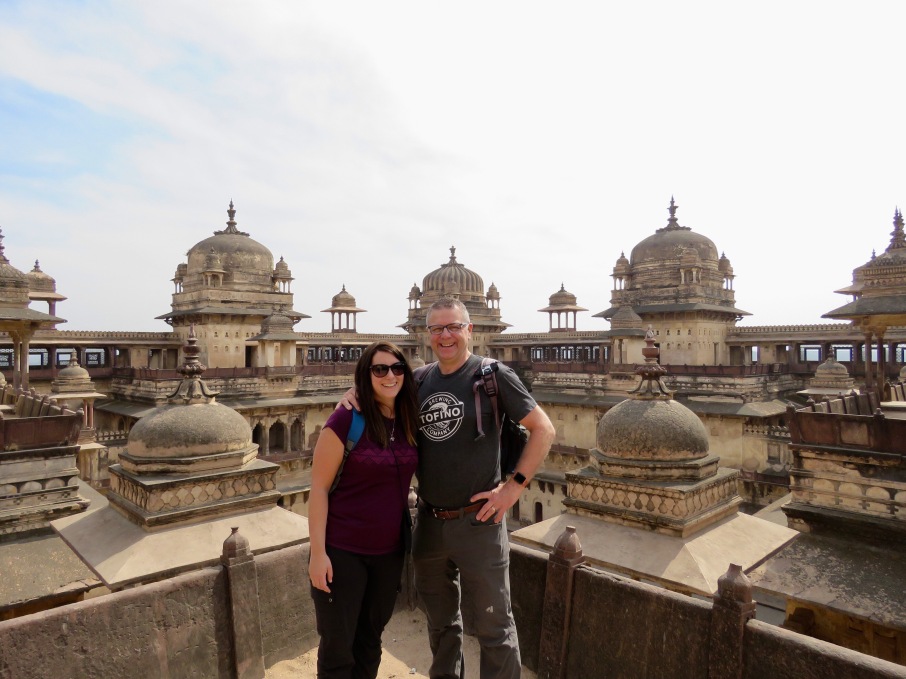 Lunch took a while, but it was delicious and cheap! We worked it out to $4 for both of us to eat, not including drinks.

Some of us decided to tour the other temple in town, which now that I’m reflecting, I think was not the same one our CEO said was part of our palace ticket price, considering there was no ticket booth there. We walked around a bit and took some pictures, but most of us were put off by a man following us around with a “deaf and dumb” sign jumping around so we left to go shopping.

We managed to get some shopping done, 2 tops for me, 1 skirt (for me obviously) and 1 top for Derek for $30. On our way back to the hotel, we stopped at a spice shop where some kids were hanging around after school (probably the spice lady’s family, or spice baba as she’s called). We figured this was a good chance to give out some of our maple candies. In hindsight and after doing some reading, I learned this wasn’t the best idea as it perpetuates the tourists=candy and rewards begging, even though these kids hadn’t asked us for anything. The few kids had called over all their friends and before we knew it, we had no candy left.

Most of us met up at 5pm for a cooking class. Our tuk tuks took us to a local home (as it happens, it was the home of our tour guide from earlier in the day).  We were lead to a room at the front of the house where she had a dual gas burner on the floor with a small stool for sitting and spices and ingredients around. There were chairs for the rest of us and our cooking teacher gave us paper and pens to write the recipes down on. The first recipe was masala chai, which was delicious. I now had an appreciation for how long it has taken to get a chai in India. The process takes a good 10 minutes even if you have your spices premixed. And in complete Jenn style, I spilled half of my hot tea all over myself. We were able to join in the cooking process, but not many people volunteered. Out of 13 of us, only 3 participated (including myself). We made Aloo Gobi (potatoes and cauliflower), eggplant curry, cumin rice, guava chutney, spinach chapatis, plain chapatis, a sort of cooling off yogurt thing with chickpea flour puffs, and a chickpea curry. It was a lot of food!  Apparently a normal family meal would have one curry, one type of chapati or rice, and maybe a chutney. She gave us a ton of chapati to take with us, which was handy for the train we were about to take. The cooking class cost us $12 each and the tuk tuk there and back was $2.

We waited around the hotel a while until it was time to get our overnight train. We were treated to proper taxis to drive the 30 minutes back to Jhansi, including a 10-minute stop at a bakery to stock up on breakfast snacks. With 4 of us in the cab, someone had to sit in the middle seat in the back. I opted for that seat and soon realized there was no seatbelt. That ride couldn’t be over soon enough. There was so much dangerous passing happening. Like tour buses passing big trucks and 5 vehicles passing a big truck.

We got to the train station and there was no bag X-ray or anything, but there was quite a tight maze to pass through to get in. A lot of our group had trouble with their roller bags and such, but I fit right through with my backpack easily. There were a ton of people sleeping on the floor as soon as we walked in. We found a waiting spot and I realized my Fitbit was gone. I don’t think a pickpocket got me, I think it more likely came off when I was putting my backpack on while carrying my daypack. Derek went for a walk to find it for me, with 5 taxi drivers trying to get his business in the span of 5 minutes.

Shockingly, our train was on time. Apparently this overnight train is always late, ranging from 30 minutes late to 12 hours late. And then you could have delays on the go if there is fog.

We piled onto the train and both Derek and I were pleasantly surprised by our accommodations. On one side of the train were 2 sets of 3 bunks facing each other with a small table by the window. The middle bunk folds down so people can just sit on the bottom when they’re not sleeping. On the other side of the train were 2 bunks perpendicular to the other bunks. The bottom bunk folds into 2 chairs and a table.

There were sheets wrapped in paper, pillows (although someone stole mine, which was ok since I had a great travel pillow with me), and blankets which we didn’t really need.

It was pretty late, so we all pretty well went to bed right away. I’m happy I brought my eye mask because some people had their lights on for a while. Derek didn’t use his. I decided to take the top bunk. I figured it would be safer against gropers.