The group met at 7am to head to the train station. We would get some food on the train, so we wouldn’t be having breakfast at the hotel like we had been every day so far.We got to the train station via our bus that had been with us since Delhi, and said our good byes to the bus driver and his helper. You have to put your bag through an X-ray and walk through a metal detector. It was pretty chaotic, no order to the system and certainly no queue. We got to our platform and waited. Our train was about an hour late, but we were kept in the loop through the announcement system in the station. There’s also an app that will keep travellers informed of delays as well.

Throughout the station there were a fair number of beggars. Probably a dozen had come up to us in the span of an hour. And when they come up to you, they stay there for a good minute. There was a man sat on a rolling wood platform pulling himself around, a man doing some sort of crawl around the floor, an old lady, a girl maybe not even 20 with a baby, and the toughest was a couple of kids less than 8 years old. There was another tour CEO there and he gave them gloves and a pack of cookies. We were told if we did give anything, it should be opened food. If it’s unopened, it can be sold.

We made it onto our train and were pleasantly surprised. It wasn’t luxurious by any stretch, but we had assigned seats and tons of leg room. We also got meals. There was two pieces of bread, butter, some spicy vegetable soup, some sort of coconut curd yogurt thing, something that looked like a plain donut, and a vegetable patty made from semolina. It was all pretty good. We also got a bottle of water and some lemonade.

The train ride was over before we knew it. I was actually ready to start charging my iPad when the train announcer said we were at Jhansi.

Once at Jhansi, we all took a 15 minute rickshaw ride to a paper plant called Taragram. The business supports tribal women in the area. They make paper from scraps of fabric found on the streets. We took a quick tour, but no one was doing any work. Since our train was late, we got there in time for their rest time. Most of the ladies were lazing and napping quietly on the ground. They had a great little gift shop at the end, with paper lantern covers, notebooks, envelopes, gift bags, and small boxes. Both Derek and I picked out some notebooks.

We then went another 15 minutes to our hotel, the Orchha Resort. The drive was pretty harrowing. All the driving is pretty crazy, but this drive was exceptional. It was a two lane road, not sure what speed we were going, but we shared the road with large tour buses, rickshaws, bikes, and cars. There was constant passing and always just in time not to have a head-on collision. Our driver was fine, it was watching some of the other drivers that was scary. We don’t have any pictures of the highway drive, but here’s a shot from Jhansi, before we hit the highway. 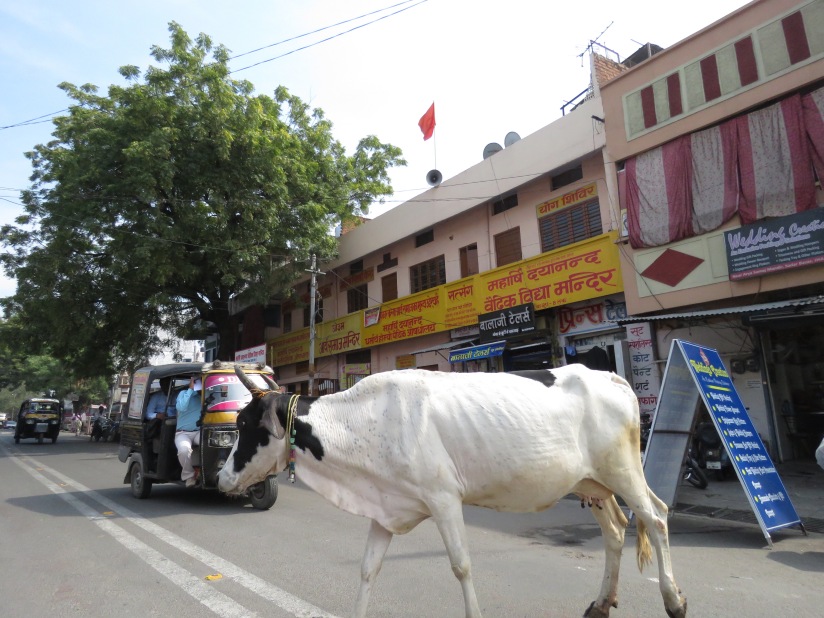 We were pleasantly surprised by our hotel. We were right up against the most amazing structures, which were built as a memorial. There as a pool and a spa. They had the spa listing on a banner in the lobby, and someone mentioned the head and scalp massage (also includes the shoulders). I was sold. I figured including tax and tip, I could get a 30 minute head and scalp massage for $20.

We were lead to our rooms, which were actually tents in a courtyard area. The tents had a proper locking door, beds, a fridge, a tv, and a full bathroom. Extremely cool.

My head massage was amazing. She loaded my hair up with what smelled like almond oil and spent probably 25 minutes on my head and 5 minutes on my shoulders and upper back. She did a lot of percussion massage, even on my head, which involves karate chops for lack of better description. It was pretty amusing at times!

We went for our orientation walk of the town. Orchha means hidden city, which is understandable. It really felt like we were tucked away from the hustle and bustle. There were lots of shops along the main street, as well as what we assumed to be people’s homes built out of wood panels and fabric. Slums, basically. We had some free time to walk before we went to the Hindu temple to watch a prayer ceremony. We walked with some of the group up to the temple to check that area out. A young girl with very good English approached one of the women in our group and they had a bit of a chat. From what I could understand, the girl, who was maybe 9, had an exam tomorrow in Hindi. The woman from our group gave her some money to buy herself something as a reward for the exam. The girl insisted she couldn’t take it, but was quick then to ask the woman to visit her family’s shop for a gift, no obligation. She was very well trained. At least at that point the woman from the group knew to say no and tried to get away, but by then word got out that she was handing out money and at least 10 more kids came over asking us all our names and where we were from. All the lights then in town went out, so we decided to make our way back to our meeting point. Along the way, a cow with some pretty pointy horns started walking quickly right at me, so I quickly started walking to get out of its way. Unfortunately it got Derek a bit, but as our CEO said, he wasn’t punctured. 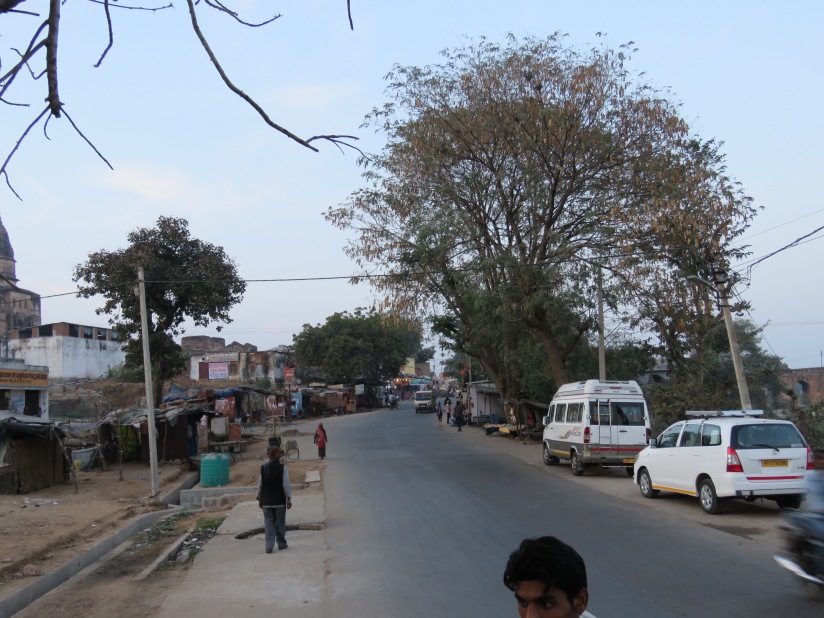 We couldn’t take anything with us into the Hindu temple, just ourselves basically. We left everything locked up in a restaurant. We left our shoes and socks outside the temple. There was a guy there whose job appeared to be guarding shoes.

Watching the prayers and hearing the history was incredible. Everyone I spoke to in our group came away wanting to learn more about Hinduism. I had never seen or realized or known anything about it before, and it was really enlightening.

Just over half of us had dinner in town at a hole-in-the-wall type of restaurant, the rest went back to the hotel to eat. After last nights experience, I now know to eat where the CEO eats. I mentioned the silver bits in our food last night and he said it was edible. Derek continued to beg to differ. Anyway, the food was amazing. Some of us decided we would return there for breakfast the next day.

Our CEO had also informed us he wanted us all to go back to the hotel and hang out around the fire in our tent courtyard, and that he would supply us with some rum and some whisky. We would just have to bring our own mixer. We popped to the store next to the restaurant and got a 1L of Pepsi for $1. Some of us opted to walk back to the hotel, others decided to rent a rickshaw. The walk back was pretty uneventful aside from thinking an angry dog was following us and then getting distracted by a tiny stray puppy we nearly missed our turn back to the hotel.

Drinks around the fire was great, we learned a bit about what we had in store for us in Nepal, including a 4×4 safari. Derek also decided that since we didn’t get the balloon ride, he would most definitely take the Everest flight now.

View all posts by Derek Bowen