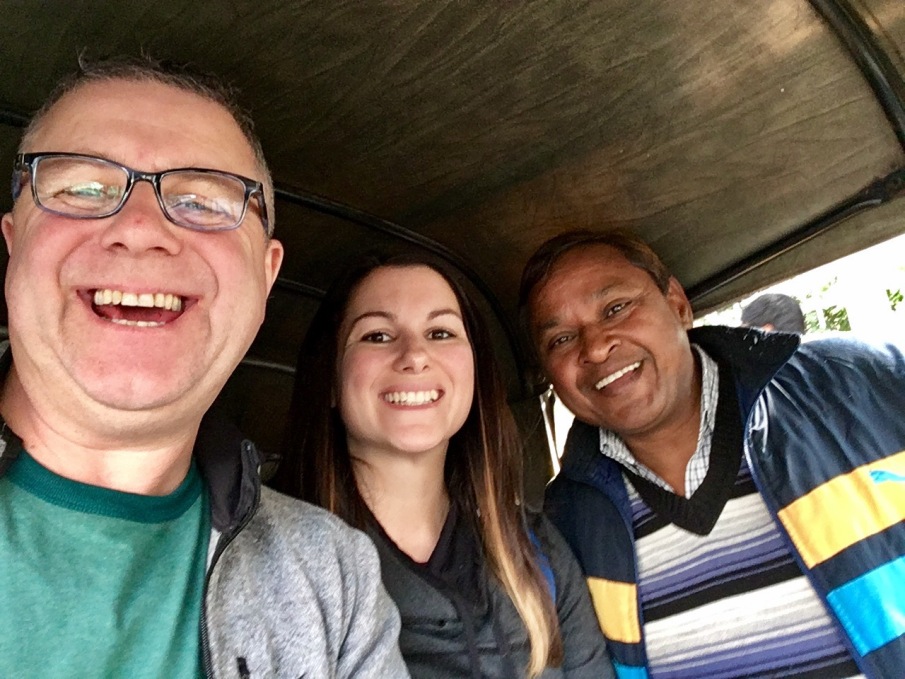 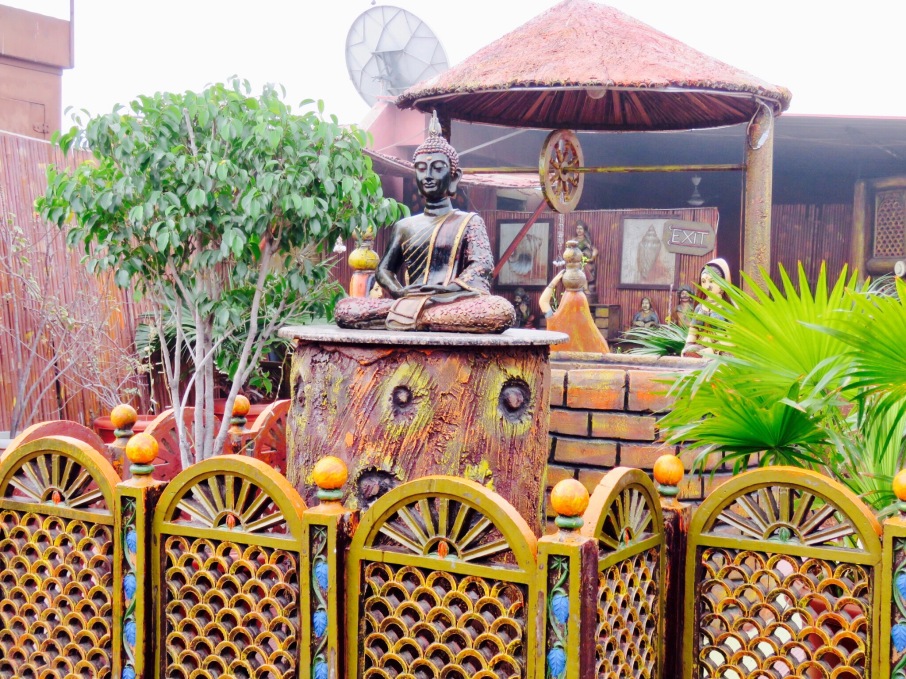 Neither of us slept well. We arrived to Hotel Perfect at midnight and went straight to bed. The room is big, but everything in the room aside from the TV seems pretty old. The windows aren’t well sealed so it felt cold and damp in the room overnight. Then there’s the sound. I could hear shouting and stray dogs barking. Those sounds were replaced at around 3 or 4 a.m. with some very noisy birds.

We decided to get up around 5:30 a.m. since we weren’t really sleeping anyway. We weren’t able to have breakfast yet, so we hung out in the room until around 8 when we decided to find an ATM. The roads were just insane, Delhi is certainly not a walkable city. The sidewalks around our hotel were not really used as sidewalks, everyone just walks in the road and you just have to be careful not to get in the way of any vehicles. Luckily, they use horns a lot to warn you. Oh and along with vehicles, you’re sharing the road with stray dogs. They were everywhere!  They made me pretty nervous, since we didn’t get the rabies vaccine, but they were all just doing their own thing not interacting with humans at all.

We had no luck finding an ATM with cash, nothing was really open at all at that hour. We found our way back at the hotel and the front desk guy said that it would be likely to find an ATM with cash after 10, but he could change some money for us. We took him up on his offer eventually, but at that point we decided to go have breakfast.

The rooftop has a restaurant, and there were a couple groups already there. We sat on our own and I ordered the “small” Indian breakfast while Derek ordered the large. Both were pretty big. Interestingly there was a group of 20-something guys all sleeping on the roof under 3 walls and a roof.  One guy eventually woke them up, and they carried a foam mattress away and all had breakfast of their own. It was a very interesting scene. We thought perhaps they were hotel employees.  We had a man from our tour join us for breakfast and we chatted for an hour or so over chai. He mentioned that he and a friend had rented a tuk tuk for a couple hours to take him around the city.  We went off in search of a bank.

We didn’t make it far before a tuk tuk approached us asking us if we wanted to go with him. Derek tried telling him we wanted to walk, but he convinced us he would take us to where the action was very cheaply (20 rupees, which is not even $1).  Unbeknownst to us travel newbies, this was a bait and switch ploy. Once in his tuk tuk, he offered to take us around for hours for 250 rupees ($5). We went for it, considering how unwalkable the city is. He showed us some sights, some government buildings, some temples and mosques, then he dropped us off at a handicraft market. We later read that these drivers typically do this and get a commission on your shopping. We kind of figured after he dropped us off at a second one that was exactly the same as the first. He even tried a third bazaar, but we were definitely not falling for that again. We did some shopping, but I’m sure we were ripped off. I think we will be more discerning in the future. Even inside these bazaars, they are pretty high pressure. There are rooms of different shopping (rugs, jewelry, clothing, pashminas, paintings, knick knacks) with the salesperson in one room pushing you to go to the next after you’re done with them. It was very exhausting!
The driving was pretty crazy, as we had experienced last night. I never really felt my life was in danger, but I’m sure if someone hit our tuk tuk hard enough, it would just tip and we would probably not be in good shape.  Anyway, we saw lots of stray dogs, lots of homeless people, I counted three guys on separate occasions relieving themselves, a kid on  the back of a motorbike with no helmet.
Afternoon

Our tuk tuk, Raghu, took us to a couple of different ATMs before we found one that had money. As soon as people saw it worked for Derek, they came running to use it too.  Then lunch. We had 2 beers, 1L of water, 2 curries (1 paneer, which is cheese, the other a stuffed potato curry), garlic buttered naan, and basmati rice for about $35. There was so much food we couldn’t finish it. Back at home, that would have cost us double.  We were both were completely exhausted, so Raghu dropped us back to our hotel where we slept for a few hours.

We met up with our tour CEO (chief experience officer), Shivraj, and the rest of the group. The CEO insisted he didn’t want to be called a guide.  He made us aware the government requires tour guides to be local to the area, so we will have tour guides in addition to Shivraj. He talked to us for an hour about what to expect… things like due to time differences in when we all booked our trip, we will likely end up in different train cars from each other. Also, if we need a toilet during a 6 hour bus ride, to let them know in advance and they will find us a mustard field to go in. I’m a little put off mustard now! He also gave us the option to pool our money to cover all our tips (except food and bus drivers) or pay individually, we all opted to pool.

Most of us then decided to go for dinner, so Shiv took us to a restaurant walking distance from the hotel.  It was 7pm and most people eat at around 9 pm, so it is sometimes hard to find a restaurant open that “early,” also, that if we continue to have dinner early, we will always be eating with other foreigners instead of with the locals.  It was pretty great having him because I think if we were on our own we would have been (or at least I would have been) overwhelmed at trying to find a place to eat. Shivraj talked to us about the menu, what everything meant, which was great because I opted for a naan with my meal I probably wouldn’t have ordered otherwise (thin naan in layers with clarified butter between each layer). Since Derek and I couldn’t finish our lunch, we opted to share a dish, despite the server saying it was small (I think we appeased him by also ordering rice). We got a mushroom & pea curry, which  was totally delicious.

Some of our group have gone to the rooftop restaurant for beer, while we are ready for bed. The jet lag is a strong force!